In Finley’s debut YA sci-fi novel, star-crossed lovers from different dimensions confront their own emotions and the taboos of their respective cultures while awaiting an alien invasion. 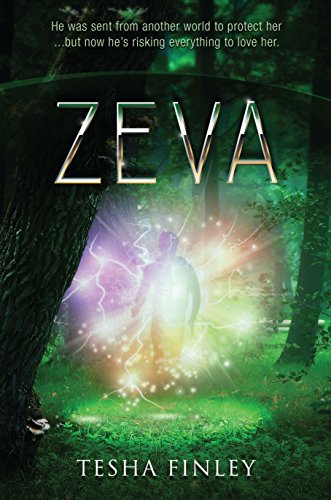 Zeva is a dimension inhabited by humans who’ve been created to protect Earth. They’re stronger and live longer than their Earth counterparts and can also transform themselves into creatures with superpowers, such as flight or X-ray vision. Seventeen-year-old Tristan has been raised differently than most Zevians, trained to seek inner calm rather than rage. He’s fascinated by Earth and spends his time searching for the closely guarded portal between the two dimensions; he usually does so with Kyra, who is in love with Tristan, but he regards her like a sister. Tristan is excited when he’s able to accompany his father on a mission to Earth, where he must fit in as a normal teenager attending high school. On his first day, he meets Ember, who has had inexplicable dreams featuring her and Tristan in some kind of war. The mystery deepens—and seeds of romance are sown—when they shake hands, causing pleasurable electricity to run through both of them. The two soon fall deeply in love, but Tristan attempts to push her away, as it’s against Zevian law to bond with a woman from Earth. Finley keeps this romantic push and pull going through most of the book as clues come to light about the various mysteries. Meanwhile, Tristan’s upcoming transformation ceremony and the war predicted by Ember’s dreams and Zevian prophecies loom large. This novel, the first of a planned trilogy, is part science fiction and part mystery but chiefly a coming-of-age romance. Finley’s characters are sympathetic, realistic, and nicely defined, and the author captures the melodramatic (and G-rated) aspects of teenage love. Although the prose could be crisper, the fast-paced plot, with its mounting tension, results in an exhilarating page-turner. The ending is a perfect combination of revelation and cliffhanger that will leave readers spoiling for the next installment in the trilogy.

A solid pick for fans of romance and science fiction.